Manchester City boss Pep Guardiola has confirmed that Fernandinho could be out of action for up to four to six weeks.

The Brazilian was forced out of their Champions League 3-1 victory over Portuguese side FC Porto due to a muscle injury barely five minutes after coming on as a substitute.

This came hours after Nathan Ake picked up a groin injury and was not part of the match played at the Etihad Stadium.

The Citizens now have about six first-team players out injured ahead of their Premier League encounter against West Ham this weekend. 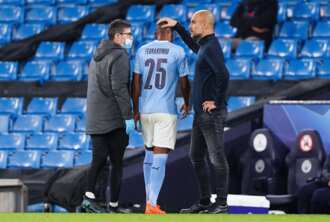 Fernandinho on his way out of the pitch after picking up an injury in Man City’s victory over FC Porto. Photo by Matt McNulty – Manchester City.

Aymeric Laporte, Kevin De Bruyne, Gabriel Jesus and Benjamin Mendy have earlier been ruled out before both Ake and Fernandinho were added to the list.

Though De Bruyne and Laporte are expected to commence training on Thursday, October 22, they may however not be a part of the game. Guardiola said:

It is bad news with Fernandinho. He has a problem in his leg, he could be out for four or six weeks.